What’s the point of releasing open-source code when nobody knows about it? In “Release Notes” I give a round-up of recent open-source activities.

Slightly calmer month, nonetheless, here are some things you might enjoy:

Tiny debouncing function for Angular.JS. Debouncing is a form of rate-limiting: it prevents rapid-firing of events. You can use this to throttle calls to an autocomplete API: call a function multiple times and it won’t get called more than once during the time interval you specify.

One distinct little feature I added is the ability to flush the debounce. Suppose you are periodically sending the input that’s being entered by a user to the backend. You’d throttle that with debounce, but at the end of the process, you’ll want to immediately send it out, but only if it’s actually needed. The flush method does exactly that.

Second benefit of using an Angular.JS implementation of debounce: it integrates in the event loop. A consequence of that is that the testing framework for E2E tests (Protractor) is aware of the debouncing and it can take it into account.

A couple of small feature additions to angular-gettext, but nothing shocking. I’m planning a bigger update to the documentation website, which will describe most of these.

Working with a NoSQL store (like MongoDB) is really refreshing in that it frees you from having to manage database schemas. You really feel this pain when you go back to something like PostgreSQL.

The ensure-schema module is a very early work-in-progress module to lessen some of that pain. You specify a schema in code and the module ensures that your database will be in that state (pretty much what it says on the box).

It supports PostgreSQL and SQLite (for now). One thing I specifically do not try to do is database abstractions: there are other tools for that. This means you’ll have to write specific schemas for each storage type.

There’s a good reason for that: you should pick your storage type based on its strenghts and weaknesses. Once you pick one, there’s no reason to fully use all of its capabilities.

This module is being worked out in the context of the project where I use it, so things could change.

Earlier last month I gave a presentation for the Belgian Angular.JS Meetup group: 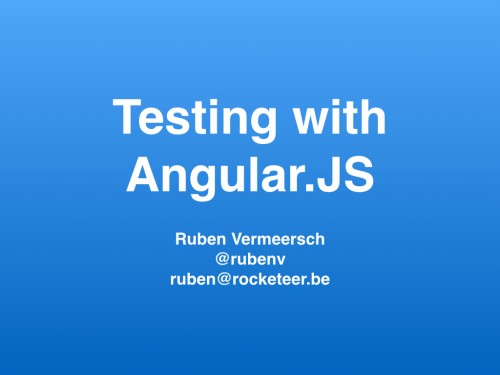 The slides from this presentation are now available as an annotated article. You can read it over here.