I’ve just pushed F-Spot 0.7.2 out into the world, four weeks after the F-Spot 0.7.1 release. This was a very busy cycle (in part due to GUADEC), but despite all that we’ve continued our path of fixing loads of bugs (closed over 50 of them) and making it generally much more solid.

No big earth-shattering user-visible new features in this release: the focus has mostly been on fixing breakage and solidifying what we have. All of this to make sure that F-Spot 0.8.0 (the next release, in 4 weeks from now) will be stable and supportable over a long period of time. This will allow us to make big and radical changes during the 0.9 cycle, which starts together with the 0.8.0 release and will last for 6 months. More on that in a future post.

Get your hacking shoes on. 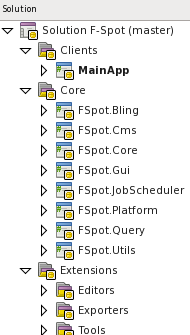 You can now build, develop and debug F-Spot in Monodevelop

From a developer point of view, there was a very big change though: F-Spot can now be completely built using the Monodevelop IDE. You still have to do the initial ./autogen.sh; make; make install to make sure all the native code is built, but afterwards everything can be done in Monodevelop.

We want to make it super trivial to dive in, similar to how things work in the Banshee Awesome Factory (Gabriel Burt gave a great talk about this at GUADEC 2010, check it out once the recording is online!). This is an ongoing process.

Getting the code
You can get all of this goodness through GNOME FTP, the OpenSUSE build service or the F-Spot team PPA (packages will be up shortly). More info can be found in the full release announcement.