Four weeks after F-Spot 0.7.0, we are happy to announce the immediate availability of the second release in the 0.7 development series: F-Spot 0.7.1. This series will lead up to the release of F-Spot 0.8.0, which is scheduled for the beginning of September, well in time for inclusion in the major distributions. Here’s an overview of some of the major changes in this release:

Better metadata through Taglib#
One of the larger sources of instability in F-Spot was the sometimes fragile handling of metadata. After careful consideration, Mike Gemünde and I chose to extend the Taglib# library used by e.g. Banshee and add image support to it (code on gitorious). We have been working on this for almost a year and it is now in a usable state. This brings us much better metadata handling in F-Spot, backed with an extensive regression suite so that we’re actually sure to be handling your data safely. It also brings us fun features like full support for XMP sidecars, a must for those worried about file integrity.

This work isn’t done yet, there might be issues with files we haven’t encountered yet and not all RAW formats we used to support are understood right now. We will make sure all of this is fixed before 0.8.0. If you run into trouble, please file a bug.

Remove from camera
The importer now gives you the option to remove files from the camera after a successful import. We’ve long refused to add this because it is generally not a good idea to do so: you should really backup first. However, you are also free to do what you want. Now you can. 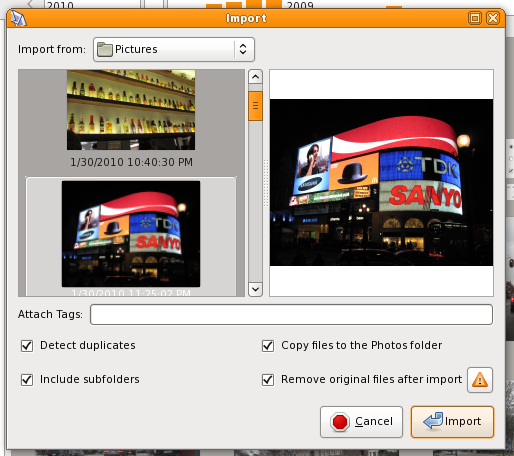 The little warning button pops up a warning that explains how you should really backup first before doing this.

Piles of cleanups, back to lean and mean
We’re working with a long-term vision here: part of the goals of the 0.7 series is becoming lean and mean again, cleaning up the codebase and making F-Spot maintainable/hackable again. This means that a lot of work happens behind the scenes. Probably the best way to illustrate this is this pretty graph from Ohloh:

The interesting part is on the far right: steadily dropping.

On the far right you can see how we’ve been steadily reducing the amount of code from well over 200K lines to somewhere in the mid 100K. All of this while improving and adding stuff. We’re truly building the foundation for the future here.

Bugs!
And finally, there’s over 85 bugs closed. Similar evolution as the LOC number here: fixing faster than it is growing.

Goodie, I want!
You can get all of this goodness through GNOME FTP, the OpenSUSE build service or the F-Spot team PPA (packages will be up shortly).

More info
More info can be found in the full release announcement. This release would have not been possible without all the people (code from 18 persons!) that contributed to it. Many thanks to them. A full overview is in the announcement.