Quora: Social networking without a cult of personality

I’ve become a fan of Quora lately, which is a community-moderated questions and answers site. Think Yahoo Answers, with quality rather than hilarity. Judging from the activity in my inbox (follow notifications for instance), it’s also very much on the rise (though mostly among early adopters in the tech scene).

What I find most interesting about Quora is how they take a fundamentally different approach from other social networks: they are building an ecosystem around content, as opposed to the usual cult of personality on social networks (which mostly seem to revolve around self-promotion and not actually valuable information).

This has a nice result: opposed to the short-lived nature of Twitter/Facebook updates with very little use outside the circle of ones acquaintances, the result is generally high-quality content that is useful to a wider audience. And most importantly: it naturally demotes personality to a lower rank than meaning/wisdom. This won’t prevent the larger personalities from trying to stick out, but good moderation can go a long way to make sure that value gets the highlight.

Is this something that can be kept up? Are they truly building the opposite of the normal overload-of-meaninglessness on social networks? Only time will tell, but it’ll be interesting to see how it evolves. 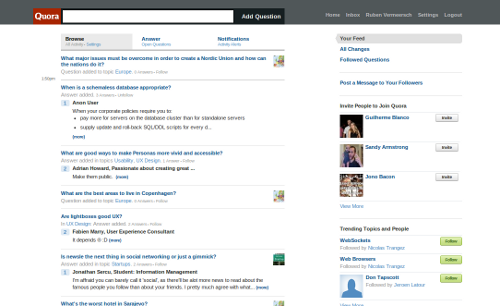